As bad as things seem to be these days, when just waking up in the morning can bring a whole new calliope of anger and pain, it’s good to know that the farmers of the Eastern Shore are out there continuing to provide us with fresh fruits and vegetables each summer.

We made a stop at the Redman’s Wagon on Monday, and as luck would have it, not only was our man Bill Kelly manning the stand, but who should also show up but Cathy Redman herself!  No hugging was allowed, but it certainly was great to see them both, and to see all the things they had on the Wagon. Cucumbers and strawberries, cabbage and cauliflower, sugar snap peas and English peas.  Not to mention plants!

And Godfrey’s in Sudlersville, another respite from reality.  Here we get tons of asparagus, blueberries and cherries, corn of course and every manner of vegetable in between.  Plus, Godfrey’s has the added bonus of selling their own kettle corn, popped right there in the barn, sometimes right before your eyes.  And ice cream! And Lisa’s delectable baked goods, using Godfrey’s produce.  It’s impossible to leave empty handed.

And Arnold Farm, with their wagon parked conveniently besides the Tastee Freeze, right now offering spinach and chard, squash and lettuce, plus plants and later on the best heirloom tomatoes you can find.  Not to mention corn.  And sunflowers.  And melons and peppers and beets.  All summer long we have access to this bounty of produce, without getting our own fingers dirty.

And these are only a small number of the Produce Production People in this area. Let’s then add to our riches, because we also have the Chestertown Farmer’s Market, currently set up at the East Coast Storage on lower High Street.  We have not been good customers at the Market this spring, due to our own business taking up extra time on Saturday mornings, but it is the place to go for every variety of fresh produce you can ever want, with the added bonus of talking to the people who grew it.

Eventually there will be smaller farm stands at the end of farm lanes around the county.  Perhaps even more this year than usual, since it seems that a greater number of people are gardening than usual, and when they discover they just cannot eat one more zucchini, maybe they’ll set up shop at the end of their road and sell some to us!  One summer we discovered the absolute best sweet corn we’d ever had, at a little stand selling only corn on Still Pond Road.  It was a one time deal, but we’ve never forgotten it.

Right now we are in the thick of peas and cherries.  We got a big bucket of English peas from Redman, and immediately set ourselves on the porch shelling, as is customary. 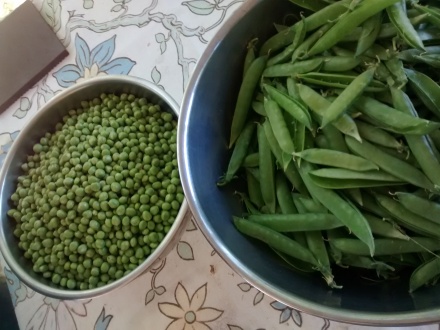 They are now all happily ensconced in the freezer.  The cherries, sour pie cherries, are from Godfrey’s.

Half are already pitted and half of those are in the process of becoming Sour Cherry Preserves with Cherry Brandy.  The recipe comes from one  of my favorite cookbooks, “Fancy Pantry” by Helen Witty.  This recipe is new to us,  and is a three day affair.  So far we have cooked the cherries for 20 minutes with a little water, then strained them and added sugar and lemon juice to the liquid left behind.  This was boiled for 5 minutes, then added back to the cherries, which will sit out over night.  Tomorrow we will cook them again, in the syrup, for 4 minutes, then set aside for another 24 hours, until Friday when we will cook them one more time, for 3 minutes.  We are definitely adding the “optional” Kirschwasser just before we process them.  I’ll let you know how it turns out, seeing as preserves are not something we make every day.

The rest of the cherries will become jam and cherry hand-pies, a project for Friday as well.  Cherry pie must be eaten every summer, and since it would be uncomfortable for Kevin and I to eat a whole cherry pie by ourselves, we are going to make individual hand-pies, which can go into the freezer and baked as needed.

Thinking about sugar corn, prepared as “Elote”, or Mexican Street Corn, with mayonnaise and queso fresco, gets me out of the bed in the morning.  Or watermelon, which I eat every single day when it is in season.  And of course, everyone’s favorite – real field grown tomatoes, sliced thick between two slices of white bread, tons of mayo and plenty of salt and pepper.  Who needs more than that?  All this produce, soon at a stand or market near you.  Thinking about it makes wearing a mask and refraining from hugs a bit less trying.  Life may not be what we’d like it to be right now, but the Farmers will see us through and we will eat like nothing is wrong with the world. 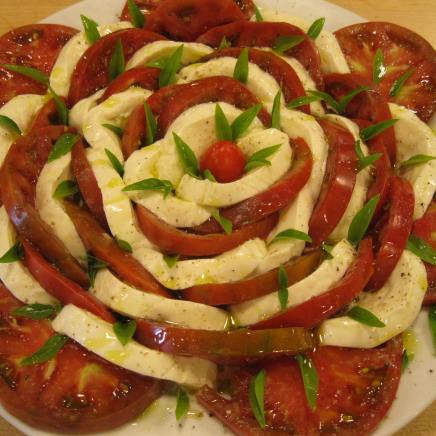