It seems as though we have been eating at home a lot more often lately than was our routine back in the day.  Part of it, I think, is we are finally losing our old restaurant life-style of eating.  In our past life – at least 40 years of it – our dinner hour was spent at work.  I’d have “dinner” early, just before service in the restaurant began.  And that meal was often a mug of soup stolen out of the soup warmer or a hastily put together salad from the salad station with some leftover chicken that was going to get tossed out before too much longer. Kevin’s dinner would consist of all the tasting he had to do all day long. When we were off and at home, sometimes a meal was cooked in our own kitchen (or, more likely, over the Fire-pit), but frequently the Chef was not really interested in cooking another meal and his wife was unprepared to do so. Dinner would then be out at another restaurant, this time cooked by another professional.  Years of this sort of meal-time life shapes a person I guess, and it has taken awhile (!!! ya think??) to get used to the idea of “home cooking”.

Since we’ve had the K-B Market, we’ve been at work less and at home more.  Especially me; Kevin continues to put in some pretty hearty hours, but I am not as tied to the stove as he is.  Thank god.  (and also thank the gods that he loves to cook!)  So it would make sense maybe that I could be the one to maybe make dinner now and then, you wonder?  But I don’t like to cook.  I’d rather go out.  Needless to say, reality check! not only is eating out somewhat expensive on our limited income, but restaurant choices are limited as well, with menus we know all too well.  Time for a change.

We don’t, however, have what you might call a good track record at working companionably together on this cooking thing.  You can probably imagine why.  I learned early on in our relationship that if I chopped the parsley incorrectly, I wouldn’t ever have to chop it again!  Not that I would want to anyway.  It was easier to let Kevin do it the “right” way; I was content to be the dishwasher if it meant I would be fed Kevin’s results.  Occasionally I would/will make the entire meal – I do have a few things I can concoct with some degree of success – but this has always been a pretty rare event.  Fried chicken on a birthday or fajitas for Sunday dinner.  Mostly cooking at home has been Kevin’s domain, just like at work.  But that is about to change.

I am exceedingly amazed by people who cook dinner for their families every night.  The NYT food section regularly shares “weeknight” recipes, designed for the working parent who comes home at 6, just in time to whip up a delicious meal of Mediterranean sheet-pan chicken with couscous for the hungry brood.  Why can’t we do that?  I think I had an epiphany last night, while pondering this dilemma.  It’s because we really don’t keep much food in our house!  We could “whip up” a meal of spaghetti with butter and cheese (well, maybe just butter) or a tortilla with re-fried beans (if we remembered to restock the pantry with a can of black beans after the last time we “whipped” that up for a desperate dinner), but certainly not a meal that you might actually look forward to eating, let alone a healthy one. (Vegetables are particularly lacking in our larder on a day-to-day basis.)  Time.  To.  Change.

Perhaps I should back-track a bit.  Part of the reason for the thought process that preceded this post stems from the fact that we’ve come home from work many days this winter thinking we would go out to eat that night, and each night we’ve decided it was too rainy, too late, too something to bother and ended up with cheese and crackers for the evening’s repast. Because there was not much else to chose from within our poorly stocked home kitchen.  It’s sort of ridiculous.  And gets annoying.   And since we have had some positive experiences a few times lately, cooking together, I’ve become convinced that it is a new trend we need to explore.

A lot of words just to say we need to get to the grocery store more often!

First off, we have to plan ahead.  And that means – for me – recipes.  Kevin is one of those intuitive cooks, not to mention a very experienced one, who doesn’t really need a specific recipe to make a dish.  Give him your stocked pantry and the contents of a well thought out refrigerator and he can make a meal to satisfy, without once opening a cookbook.  But he does get inspiration from cookbooks, while I get recipes.  One of the new favorites on our book shelf is “Mexican Today”, from Pati Jinich.  If you are not familiar with this PBS cooking star, you need to locate her show schedule on your local station and stay tuned.  She is terribly good at what she does, both the TV cooking show personality part, as well as the demonstrating of the actual cooking.  She is also a very enthusiastic eater. 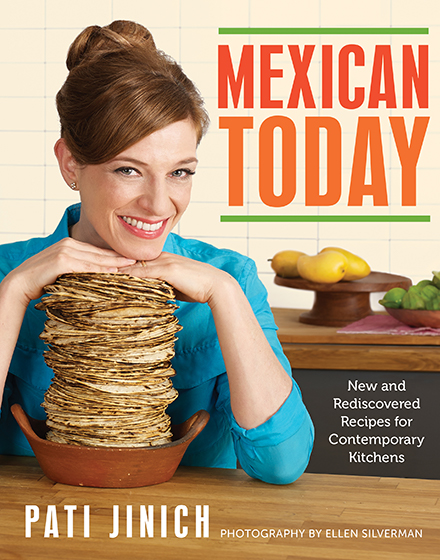 We have made a few meals out of this book, most recently the Rice Casserole on page 193.  I cannot find that exact recipe online for you, but here is a very similar variation that would do just fine.  The only difference I can see between the two recipes is that the one in Mexican Today included a cup of chicken or vegetable stock, added with the cream and cheese to the vegetables at the end of their cooking time plus a half cup more crema.  (Maybe these are improvements Pati added later?)  We also made the Tomatillo Avocado Salsa Verde on page 101 as a garnish/sauce for the casserole – not necessary but very tasty!  We split the chores – I grated the cheese and cut up the tomatoes for the casserole, and made the salsa; Kevin did everything else.  I cleaned up?  It was fun and turned out great, no changes needed.

So, next week we are going to plan ahead, get the ingredients we need for more than just one weeknight meal at home and have at it.  I’ll let you know how it turns out.  Or not.  In that case, there’s always cheese and crackers.  Or at least crackers.

3 thoughts on “Cooking at Home”