January at the Chestertown Farmer’s Market is challenging for all, I think.  Perhaps more challenging for the vendors to find customers!  The crowds are gone, but there are still a surprising number of vendors out on the chilly brick – lettuce and mushrooms, baked goods and turnips, this is all we farmers can offer you.

Cedar Run has their premo spot for the winter months – and I wonder, when summer comes, do they have to relinquish this location and be banished to the other side of the street when Arnold and Anchor return?  Seems like if they are there during the harsh – and slow – months of January and February, they should have staked out some sort of claim for the rest of the year?  No? 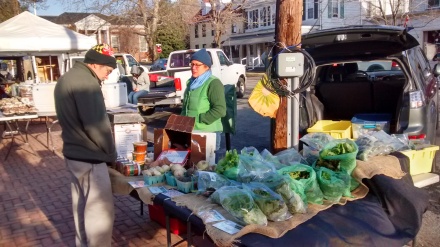 Oksana produce is there, with bags of assorted greens, the aforementioned turnips and a nice selection of fermented condiments, which Kevin loves.  And, good news, it looks as though they will be participating in a CSA program, which is especially good news for the Colchester Farm contingent.

Certainly not the view from six months ago, eh?

Lockbrier, Lapp and King are steadfast in holding up their end of the Market, along with Chesapeake GreenHouse.  So, things aren’t too bad – you can get a variety of vegetables, mostly locally grown, and as long as you aren’t craving zucchini or tomatoes, all is well.  Many we speak to agree that even as the purveyors and their produce dwindle at the Local Farmer’s Market, it’s important to continue to support those who persevere, and to keep your diet as close to home as you can this time of year.  Mushroom risotto with a Caesar salad anyone?

It looks so bleak…even Carl was taking a (much deserved) break this weekend, and as you can see, no one stepped into his spot!

Here’s to Winter and all of it’s challenges! 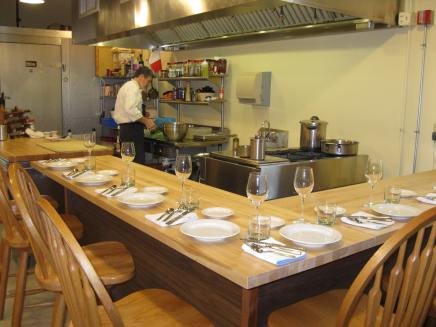